Long Island Turners You are being served

If you visited only one museum a day, you could spend the next 2 months in Berlin alone. On an island in the middle of Berlin there are 5 major museums north of Unter den Linden / Karl Liebnecht Strasse and that part is fittingly called Museum Island. From north to south the museums are; Bode Museum, Pergamom Museum, Alte National Gallery, the Neues Museum and the Altes Museum. There is also the Berliner Dom which can easily qualify as a museum. Under construction right now is another Museum, the Humboldt Forum. You might think that those buildings in the photo with the Samsung name prominently displayed had something to do with the Korean company. Samsung is engaged in many and various endeavors, they built the tallest building in the world. That big, white octagonal box is really the Humboldt Box and the building behind it is the Forum. When finished, the Humboldt Forum will house exhibits similar to the other museums on the island, but they will come from other parts of the world, like Asia and America.

The Master plan for the island includes a below ground pathway connecting 4 of the present 5 museums and represents an architectural tour through history featuring exhibits from the 4 museums involved. It is hoped that the project will be completed by 2026.

Just in case you are wondering; before the start of World War II, Karl Liebnecht was a Socialist and prominent member of the German Communist Party. After all; this was part of the Russian sector of Berlin. Karl Liebnecht Strasse is a continuation of Unter den Linden toward Alexander Platz. 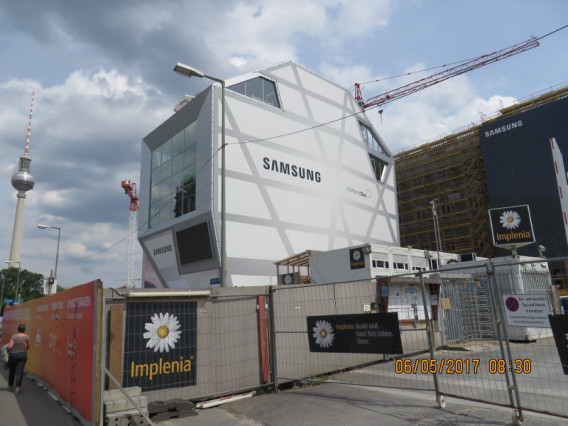 In general, there are several things to check when visiting Berlin's museums.

Photos from the 2019 Ft. Wayne Turnfest are now up in the Events section.

Photos from the Berlin Turnfest are under the Events tab.

There are new sections of the Mannheim Turnfest under the Events tab.