Long Island Turners You are being served

During the American Civil War, American Turners, mostly German immigrants, served in the US Army as volunteers in New York's 20th Infantry.  Many years ago an American Legion Post was established at the American Turners of New York.  Members of this Post have since had the honor of serving as the Honor Guard leading the entire parade up 5th Avenue.

Prior to the parade, a ceremony blessing the flags is held in St. Patrick's Church on 5th Avenue where all the flags carried in the parade are invited to the ceremony.  Our Honor Guard has the priviledge of leading the procession into the ceremony and we are the first flags out.

The Long Island Turners and ATNY march every year in the body of the parade. Old timers can remember when they marched with a float that featured performing gymnasts.  In 2012, Bruno Klaus, ATNY member and founder of the International Gymnastic Camp restarted that practice which has become a much applauded and admired feature in the parade.  They will all be there again this year.

Immediatly below are 4 photos taken from the Blessing of the Flags Ceremony at St. Peters Cathedral and Parade in 2016 and 2017. 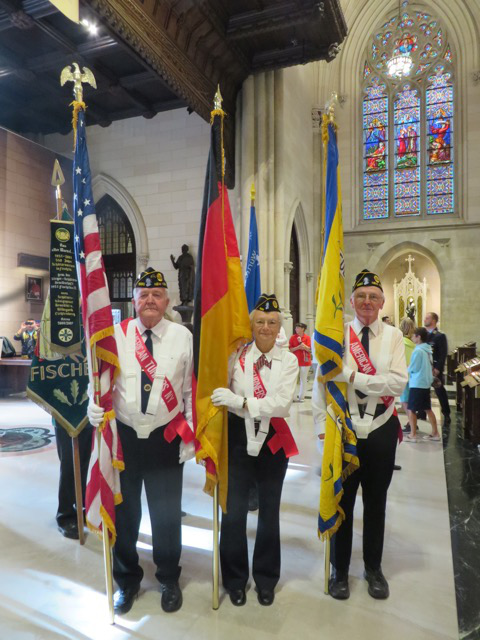 We have a few more photos to post here from the 2017 parsde and we welcome any more from Turners who are kind enough to send them here.  My special thanks to Bill and Margaret Dunleavy for taking so many of these photos.  They have participated in the Blessing of the Flags and Honor Guard for the last 20 years.

Photos from the 2019 Ft. Wayne Turnfest are now up in the Events section.

Photos from the Berlin Turnfest are under the Events tab.

There are new sections of the Mannheim Turnfest under the Events tab.